4 Reflections from a Classroom Teacher on Restorative Practices 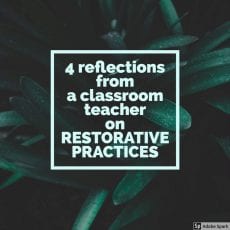 For the last two days I engaged in a voluntary training on restorative practices.  Let me first say, that my pool of friends in the world of education is not small. I’ve heard all the opinions on restorative practices ranging from complete buy in to full on skepticism.  I appreciated the first words from the presenters mouth, “Whatever you’ve googled or heard about restorative, put those out of your mind.”   I wrestled with how to frame what I had learned in those two powerful days.

I think perhaps, restorative practices are best described by what they are NOT:

Used Exclusively by Dean’s for Conflict Resolution  The presenters suggested that we think of restorative practices on a Restorative Practices Continuum that begins with using Affective “I” Statements all the way to formal conferencing for conflict resolution.

The International Institute for Restorative Practices (IIRP) also suggests that we spend 80% of our time in practices working proactively and 20% reactively.  How do we do that? Restorative practices start and end with relationships. I recently wrote a blogpost on the importance of building relationships and followed up with an additional post on helpful relationship building strategies.

One powerful tool that IIRP recommends is the use of Circles.  Circles are simple to practice.

While we spent a great deal of time talking about a lot of the nuances:  the importance of starting with a low risk question, facilitation rules, setting norms, etc. These are the key steps.

Like sitting around a campfire, circles create a safe and intimate place for each student to have a voice.  It removes barriers like tables and corners of the room, which are ideal for hiding. While often used for conflict resolution among a smaller group, when used consistently with agreed upon norms it can be a powerful force for relationship building in the classroom.

Everyone Gets a Trophy  IIRP recommends that you separate the child’s behavior from the child.  That is “I like you, but I do not accept your behavior.” The power here is that students need to feel loved and accepted for who they are.  When they do, they often change their behavior to be acceptable to those who love them most.

Recently I saw Will You Be My Neighbor at the movie theater.  According to the film, there was a backlash from groups who decided that Mr. Rodgers was preaching an empty self-esteem message by saying to that children that they “special.”  What a sad paradigm. The truth is that everyone has inherent value and is special because they are people, God’s creation.  So often we say that students are “bad,” “naughty,” etc. When we label students, we forget their inherent value and worth as human beings and leave all hope for any positive change in them at the door.

Rejection of Consequences I have to admit that I was surprised by the general appearance of the two facilitators.  They were not school psychologists equipped with data and little in the trenches experience.  Rather, they were two men, one black one white, who had physiques similar to WWF wrestlers. Both had a background as deans and had worked in one of the most difficult schools outside the city of Chicago, Maywood, IL. These men knew how to transform the behavior and culture of a school and they had seen it first hand.  They were tough guys.  Tough guys who believed in the message they were preaching.

They shared story after compelling story.  One particular story I found extremely convincing was related to two students who were fighting.  In the past, they would have each received a suspension and would have returned 5 days later still fuming and ready to go another round.  Now, while students might still receive a suspension, they are required to face one another and walk through a series of restorative practice questions that lead to reconciliation so that when they returned there would be a change in behavior.   One consequence certainly more work and more fruitful than another.

Later we watched a video about a student who had been bullied.   The headmaster explained how the two students were able to talk through their difficulties and the students had decided on an agreed upon consequence by working through the “Affective/Restorative Questions.  One teacher in our training asked, “Would the parents of the offended boy be angry that there was not a more punitive response?” Another teacher in our training responded with a genuine and heartbreaking story about a time when her daughter had been bullied.  While the offender had received a consequence, he never had to apologize to her or think through the damage he had caused. She said she would have found that much more satisfying to her and her daughter. Interesting…

Lowering of Behavioral Expectations  One framework that I found particularly helpful related to expectations and supports related to student behavioral  is called the Social Discipline Window.  On the vertical axis, is the level of expectations and on the horizontal, the level of support we provide students to meet the expectations.  We want to work WITH students to improve the behavior to meet high standards. To be honest, I can excuse behaviors at times. Rather, I want to work with students to reach a high standard of behavior that will be expected of them in life beyond my classroom doors. 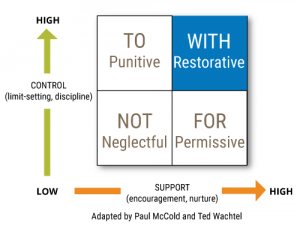 What now?  Personally speaking, I left with a renewed commitment for building relationships and plans to practice using “I” statements and implement circles.  I’m not sure what that will look like really, but I’m excited to try.  I’m thrilled to have the support of our entire administration, who not only participated in this training on a different date, but included the practice in our District Strategic Plan.

At the end of the two day training spent entirely sitting in a circle, all 40 of us felt a unique warmth and intimacy with people who had been either strangers or acquaintances to us before we began.  We had practiced circles to learn how to implement restorative practices and it had a powerful effect on a group of people with different perspectives and ideas. We closed by sharing something we had appreciated about each person in the room.  I felt feeling more hopeful for our country. After all, working through differences hasn’t been our strength lately. But, if we could teach the next generation to work through conflict respectfully…we might just have a bright future and grow in our ability to have a healthy debate and exchange of ideas.  Ahhh…hope.