4 Reflections on Authenticity in Instructional Coaching

Always growing.  One of my favorite things about teaching is that it NEVER grows old.  Each year you’ll meet new students, new colleagues, perhaps teach a new course.  Circumstances aren’t the only things that change with each passing year, our thoughts about teaching and learning change, too.  That is, if we continue to grow and learn.  I have a ravenous appetite for new ideas.  Thanks to the internet (predominantly Twitter) there is no end to the creative ways I can teach students.  If it was something that worked well in class, I would burst if I didn’t share them.  As a classroom teacher, I’d like to think I was generous with my findings, but as a coach it’s my job.  The luxury to scour the internet and think systemically on how to best encourage and support good teaching school wide is not lost on me.  I feel blessed. 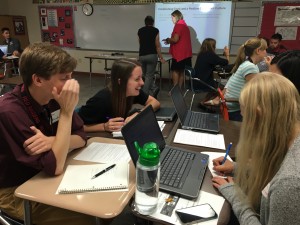 I LOVE to talk shop!  I find most teachers do.  Even teachers who might not admit it if you asked them.  If you start bringing up issues related to teaching and learning (growth mindset, PBL, etc), the ideas and opinions will fly.  Mixed in those opinions are arguments for pedagogy and philosophy that influence practice.  This sharpening of irons spurs growth.  Ironically, at least in my building, there is precious little time for productive teacher talk.

Coaching lets me talk teaching all day.  The only difficult thing is that by nature people (including yours truly) are reluctant to change and can be initially defensive when their regular practice is challenged in anyway.  However, I’m hoping most teachers ruminate on constructive criticism and come back willing to try new ideas.  I love this quote from Elena Aguilar, “The art of coaching is the art of nudging without leaving bruises.”  So true. I want to push to the point of “cognitive dissonance” but without closing relational doors.  I do believe this is an art and I’m hoping to master it.  I’m nowhere near an artist.  Right now, I’m a two year old with crayons.

LOVE is my quintessential core value.  “Above all, put on love which binds us together in perfect unity,” Colossians 3:14.  My hope is to be loving and kind in every interaction, to believe the best, seek the best for and encourage the whole teacher.  My motto this year has been “teachers are people, too.”  We have personal battles, health crises, families that need our attention and, let’s face it–teaching is hard!  I hope that teachers feel as though I’m on their team–even when they resist change–I’m FOR them!  Coaching gives me the time to listen and empathize with their concerns.  As a teacher who tried to do that for students all day, I often didn’t have time to stop and give undivided attention to my colleagues.  I can and do make time for that now.

A Unifying Force.  I love how Colossians 3:14 says that love “binds us together in perfect unity.”  As a coach, I can be an agent for positive change.  We can help to resolve relational conflict and find systemic gaps.  The goal–a healthy learning community.  This is the messiest part of coaching.  People and relationships are a mess.  I once read a book entitled Relationships:  A Mess Worth Making.  Isn’t that so true?  We are better when we join forces, but only if we can move in the same positive direction.  We won’t always agree and we’ll be better for it.  I often think of Hegel’s Dialectic:  how the debate of thesis and anti-thesis bring us closer to the truth. We’re better together if we can debate these things in a loving, self-less, humble way.  “Love binds us together in perfect unity.”

How it all began  When I was just a little girl, I began stealing extra dittos out of the garbage can at school.  These blue, fragrant copies became the basis for the curriculum for the home school I conducted in my basement.  The school had one pupil, my sister.  Who, I must say, was a willing participant and excellent student.  As such, I take full—no (insert conversation with said sister) partial–credit for her academic and personal success.

I’ve always known that I wanted to be a teacher.  As I progressed through each new grade it became the grade that I hoped to teach.  This continued through high school.  Although I knew that I wanted to be a teacher, my commitment to subject matter fluctuated from foreign language, to social studies, to mathematics, and back again.  To be honest, I can not remember how I settled on mathematics.  Perhaps it was the concrete nature of the subject or my success in mathematics.  I do, however, remember that one of the teachers I most admired during my high school years was also a mathematics teacher.

My first teaching experience began quickly after graduation nearly 20 years ago at  a medium sized high school in a rural community in the far far northwest suburbs of Chicago.  Excited and nervous to begin a career I’ve spent years training for, I entered the classroom of a teacher who had given up on the field altogether and was leaving for work in the private sector.  I wish I would have asked her why.  Though I had much theoretical training, I had very little experience, practically speaking.  My best education was about to begin.

What I lacked in experience, I made up in earnestness.  I asked teachers about their practices and ideas.  During those early years, I focused primarily on classroom management.  I knew if I could not engage my students in productive learning activities, our time together would be wasted.  During those years, I taught Algebra, Geometry and Sequential Algebra (the first part of a two year algebra program—as was the trend for lower-achieving students at that time).  Now, almost half of our students take Algebra in 8th grade.  I spent two years at my first position.

I began teaching part-time at a high school in a northwest suburb of Chicago after my daughter was born.  The community is affluent and teachers’ salaries in this district are among the highest in the state.  I taught Algebra and Geometry to lower-leveled students.  I found that I worked well with these students.  They responded well to my methods and I was pleased.

At that time I took a sabbatical from teaching to stay home to care for my two small children.  7 years later, I accepted my current teaching position at the fastest growing district in the state, where I taught remedial Geometry and Geometry.  It was interesting to step into a school that was hiring, on average, 2 new math teachers a year.

I returned to the classroom to find that the world of education had changed.  The focus had shifted to standardized testing and the No Child Left Behind legislation.  In addition, terms like “best practices,” “PLCs” and “RtI” were thrown around.  I left with the odd feeling that, although I had stopped teaching, the world of academia had certainly not stopped spinning.  Education reform, as is the norm, was still at work, but had taken a new direction while I was gone.

I was adamant that I would return and find success in the classroom, after all it was a passion that was birthed early in my childhood.  I joined committees and did my best to catch up with both pedagogical and ed tech trends.  It wasn’t easy–but I did it.  I caught up, primarily with the help from a teacher who was younger and more current than I.  I’m so grateful for the help of good colleagues who were generous with their time and talents–creating an amazing atmosphere for collaboration and school pride.  Before long I was as current as the next educator.

I ALMOST caught my breath–but then, bad news regarding US performance on international PISA exams and a demand for new more rigorous standards resulted in the Common Core Standards.  Don’t get me wrong–I certainly want to be part of the solution and I believe the Common Core has so much to offer our students in depth of understanding.  But, yet again, the cheese has been moved.  It is easy to become disillusioned as a teacher–content and instruction will have to be overhauled.

One thing remains constant in education:  Change.  That’s it!  That’s what I’ve learned.  Teaching is the most political position outside of Washington and each new administration will have its own spin on how it will reform American education.  We have to run each reform through the filter of good pedagogy and a heart that wants what is best for our students.  Some things will pass the test & some will not.  However, I will never know unless I’m open to change.  It is SO easy to see what is already working and hold too tightly to it–missing out on the opportunity to go from good to great.

How do I keep from disillusionment?  I remember why I became a teacher.  I accept change as an educational lifestyle.  I love kids–I can’t lose focus of those things.  How do you do it?

It all happened one summer…last summer, actually.  I was curious what all the commotion was about Twitter.  I even felt like the administration at my school was encouraging the use of Twitter.  Why?  Would they encourage us to use FaceBook?   There had to be something to it…and there was!  Nothing has influenced me more in my 10 years as an educator than Twitter–more specifically, the #mtbos (that is Math Teach Blog-O-Sphere).  I love collaborating with teachers, especially my Math Pal across the hall; but, imagine having the best educators in the country, no…world, across the hall?!?  That’s what Twitter has done for me.  I hope to share my new found love affair with the elementary and middle school teachers @CrystalLakeSD47s at their #translit47 conference tomorrow.   I’ve attached the link to my presentation HERE.  It starts very basic and builds.  I’m no pro, but I can help you get started!

If you haven’t stepped off the ledge with Twitter, maybe you might now?  Start by following me!  I’m @mrsjtweetsmath .  See you around the Blog-O-Sphere!