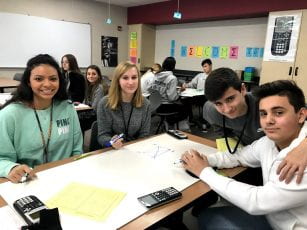 I have a friend who is an elementary teacher, and she’ll ask me for math review games on occasion. One day, I was sharing one and she said, “Seriously, you need to make a list of all these games/reviews.”  So, here it is.  Let me begin by saying, I believe MOST if not all of these were stolen from other sources.  I’m simply compiling them nicely for you (and for me) to reference in a pinch.

All of the games below can be done with a question stack or a review sheet broken into four or five slips.  For that reason, they are quick and don’t need a ton of prep.

Connect 4 – Place a grid on the board.  As each team (I suggest 3-4 in a group) completes the required problems and checks them either with you or a key, they can select a spot on the board using a symbol or initials.  The goal is for a team to connect 4 diagonally, horizontally, or vertically.  This game gets competitive when a team has lost any chance to win so they try to “block” others.  In the end, typically only one team wins.  Thanks go to my co-teacher Kayla Shivley for this one!

Gambler’s Review – Similar to the previous game, you place a numbered grid on the board, students complete required problems and mark initials on a number they consider “lucky.”  The only differences are I typically have students work in pairs on this task and at the end I use a random number generator to select winners.  I think I learned this one from colleague Allison Tuleo.

Trashketball – Similar to the previous two games, students complete problems in teams or partners and then check them.  Each team earns two points for an accurately completed problem set with a chance to shoot for 1 or 2 BONUS points depending on where they choose to shoot their trashketball from (close or far from the line).  Watch Trashketball in action HERE.   This is a FAVE among my students.  It literally requires a paper ball, masking tape and two baskets and they’re thrilled.

Four in a Row –  This game I took from Sarah Carter (@mathequalslove) which she gleaned from Fawn Nguyen (@fawnpnguyen).  I  took a review sheet and removed all the space for work.   I wrote the answers on the back of the worksheet.  On 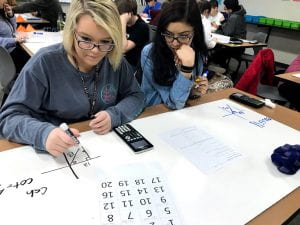 a separate sheet there is a numbered grid with the same number of problems as on the worksheet.  Students are paired and “compete” against one another.  One student starts by choosing a number.  Both students work on that problem.  When they both agree on the answer, they check to see if it’s correct. If it is correct, the student who chose that number puts his/her initials in the box.  Then, the next student selects a box/problem.  The first to get four in a row wins.  This is a review I used for an Algebra II Trig Unit.

The games below work best if you have a list of prepared problems on a PowerPoint for review or you can just write the problem on the board.

Risk – Students partner or team with a markerboard.  After they complete the problem, they decide how much of the beginning balance of $100 they’d like to gamble that their answer is correct.  At the end of the set of problems, the team with the most money in their bank wins.  A few hacks:  1) I have students in tables of fo 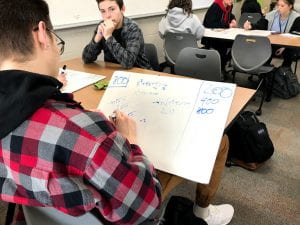 ur.  I pair them and tell them the team with the most money at EACH TABLE wins.  This means that each half of the table will keep the other honest.  Students are typically generous and say “close enough” when I wouldn’t agree.  2)  If a team loses all their money, they can get a loan for $10 to stay in the game.  This review is from Julie Morgan via Sarah Carter (@mathequalslove).

Unfair Game  – This is a game I have NOT tried yet and just learned about from former student and excellent young educator, Kayla Lewandowski, at a professional development workshop.  How cool, right? Anyways, this game is so unfair!  The rules are all in this presentation, but I’ll give you the gist.  After teams do the problem, they are randomly selected to share their response. If their answer is accurate, they can decide if they want to earn the points or give them to another team.  The point value is then revealed and sometimes it’s positive and sometimes it’s negative.  So unfair, right? 🙂

MATHO – Like the old staple BINGO, you create a MATHO board by randomly placing answers on your board BEFORE you begin.  Then, you would place a problem on the board and students solve it.  Next, they look for that answer on the board and mark it off.  They hope to get five in a row horizontally, vertically or diagonally (you can also allow four corners).

These tasks require a bit more prep, but are powerful review tasks for their own reasons.

Speed Dating – I’ve tried this one in the past and it hadn’t worked well for me.  But, I think I’ve finally got it down!  I have tables now, so that has helped. I placed the tables in a circle in my room.  On the outside of the circle I’d place students who performed best on the last 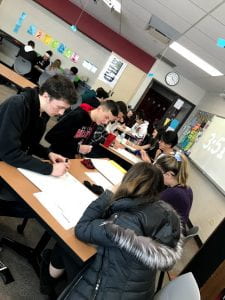 formative assessment and everyone else on the inside.  On each table I place a problem for all four people to work on.  Once all 4 students agree on the solution, they can look at the solution on the back of the paper the problem is on (I typically type all the problems onto a PowerPoint and print the whole slide to put on each table).  I use an online timer and project it on the board–typically for 3 minutes, but it depends on the type of problems I’m asking students to do.  For that reason, you may want to make sure you give tasks that will last approximately the same amount of time.  For easier problems, for example, add more of them to take longer.  Then, have everyone move right one table and complete the next task.  Do this until all your task are completed.  I have 8 tables and 32 students, so I typically have 8 tasks.   One hack:  I typically assign students to their first table since I found when I just told students to find a spot to where they were assigned (inside or outside), they’d sit by their friend and it wasn’t as effective as it could be.

Sum ‘Em Up – This requires the most prep work, but it really checks a lot of boxes:  Differentiation, critiquing the work of others, accountability, and collaboration.  There are several variations.  My favorite is to create one task like this one.  Students choose which task they complete based on the fact the problems are increasingly in difficulty from A-D.  Then, they sum up their answers.  They can self-check with the answer (which is the sum of their individual answers) on the back of the task (or the next task) or can check with you.  If it’s not correct, they’ll have to look at one another’s work and determine which solution is incorrect.  Often times kids will say, “I wasn’t super confident about my answer.”  Once they get the correct sum, they move on to the next task.  I typically color code the tasks so that I can see if a group is falling behind and needs redirection or additional academic support.  Hack:  You can find a bunch of these on Teachers Pay Teachers.

Also, here’s how I quickly group students–often assigning a “coach” who performed well on the formative assessment.  I hope it’s helpful to have a “bank” or reviews.  I’d love to learn some new reviews if you have any to share :).  Please share below…