3 Reflections from a Standards Based Grading Rookie 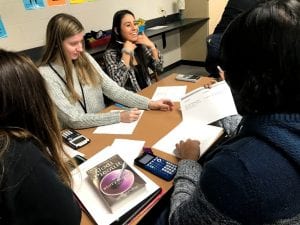 Students at work in my Geometry classroom!

This fall, not only did I return to the classroom after a 2 year hiatus as an instructional coach, but I joined and led an Algebra II team that had agreed to launch Standards Based Grading.  We were given a week over the summer to upend our current curriculum and start from scratch with the Common Core State Math Standards.  With the help of our instructional coach, we had developed a strong curriculum map and began writing our first assessments, rubrics and lessons.  We weren’t the first team to take the leap.  The previous year, the Geometry team was not only the inaugural team to take the Standards Based Grading jump in our department, but also our school.  While it wasn’t easy and took a great deal of time and effort to redesign the curriculum and assessments, it was deemed, overall, a success.

Overall, I would deem semester I a moderate success with room for my personal growth.  I hope to move forward in shifting mindsets towards growth and away from a focus on grades.  I want students to know what they know and what they don’t know.  I want them to learn the benefits of practice towards peek performance.  And I want to continue the good work of a team that cares about what’s best for students, even if we don’t always agree on how.  Also, I’m grateful to have the privilege to work with students.  Teaching isn’t for the weak, but it’s the most rewarding job there is.  It never gets boring, to be sure.  Here’s  to the future–have a great 2019!

1 thoughts on “3 Reflections from a Standards Based Grading Rookie”